Then a shoot will spring from the stem of Jesse, and a branch from his roots will bear fruit. The Spirit of the LORD will rest on Him, The spirit of wisdom and understanding, the spirit of counsel and strength, the spirit of knowledge and the fear of the LORD.… Isaiah 11: 1-2

What is the Jesse Tree, of what is the prophet Isaiah speaking?

“A shoot will spring from the stem of Jesse”. Jesse was the father of King David. We imagine a bare, withered tree stump, with no trunk or top, and it looks dead and as though the stump will never bear any fruit any more. But, a small shoot sprouts from the root of this dry stump and this is the Davidic dynasty. Because of its unsightliness and misery, it is not named after David but after his father. When Christ was born, there was nothing royal about that dynasty. But a new shoot (Jesus) did spring from the stump.

The royal authority of the house of David had lain dormant for 600 years when Jesus came as King and Messiah. When Jesus came forth, it was like a new green branch coming from an apparently dead stump.

The Jesse Tree is named from Isaiah 11:1: “A shoot will spring forth from the stump of Jesse, and a branch out of his roots.” It is a vehicle to tell the Story of God in the Old Testament, and to connect the Advent Season with the faithfulness of God across 4,000 years of history. The Branch is a biblical sign of newness out of discouragement, which became a way to talk about the expected Messiah (for example, Jer 23:5). It is therefore an appropriate symbol of Jesus Christ, who is the revelation of the grace and faithfulness of God.

Think of a Jesse Tree as a sort of advent calendar with each day depicting important characters, many of them in the genealogy of Jesus, starting with creation and ending with Christmas. Of course, we cannot include all the significant people in 24 days but each year we hope to choose different important members in the story.

How does it Work?

Each day from the beginning of Advent until Christmas, the image of a character from the Old Testament is hung on the tree represented by an appropriate symbol or ornament. The passage from the Bible that recounts the story of that character is read for family, friends or just for you to reflect on and talk about. The readings walk chronologically through the Bible, highlighting 24 historical moments that lead to the birth of Jesus 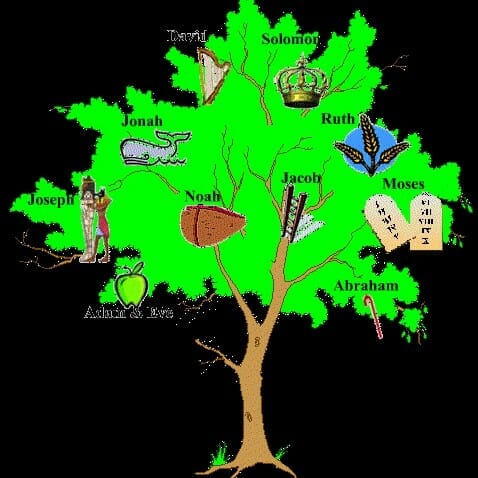