Mt Carmel resident, Reg Renehan celebrated overcoming an old fear when he decided to go on a bus outing with other residents recently.

With COVID restrictions in mind, Mt Carmel Lifestyle staff carefully planned the outing for the residents.

Reg, who moved to Mt Carmel in 2018, had always declined bus outings, mentioning to one of the staff a fear of buses from his school days.

With a bit of support and some time spent chatting about the situation, Reg decided it was time to jump the hurdle.

On the appointed day, he needed no coaxing from staff; he was ready, eager and determined to board the bus and to enjoy his day!

During the trip, Steve (the bus driver) and the Lifestyle staff engaged Reg in conversations about where they were. Reg was in his element, sitting happily and taking it all in! Afterwards, he thanked everyone involved in making it happen.

Going on a bus ride may seem like a small thing for many but for Reg it was a big achievement – something he can be really proud of! 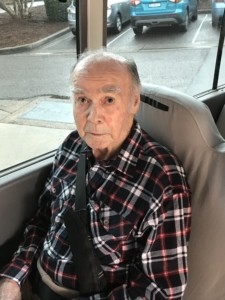