One of the standout performers from Bago Magic is set to star in a short film which will be entered in the 10th annual Focus On Ability short film festival.

Brendan Hall will be front and centre in the five minute short film. He is best known for his starring performances with Bago Magic in Hills Hoist, Indian Dreaming and Island Dreaming to name a few. Parents, Ann and Jeff, said they were proud of Brendan’s performances. “He just loves to perform,” they said.

“And the excitement levels are pretty high for this short film too.”

The Short Film Festival asks film makers to ‘Focus on the Ability’ of people with a disability and tell a story on film for the world to view. The 10th festival is set to be the biggest yet, and the generous sponsors donating over $140,000 worth of cash and prizes to encourage film makers and people with disability to tell their stories.

Coordinator of Supports Centacare – which supports Bago Magic – Melissa Barnes said Brendan was ecstatic with the decision to enter the festival.

“We are excited with the opportunity to participate in the International 2018 Focus on Ability Short Film Festival,” she said.

“We are entering a five minute film and our theme is ‘My Dream’, which we are required to submit by June 1, 2018. Brendan has stated his dream is to be a bus driver, but is also more than happy that he gets to keep the shirt and the cap too.” 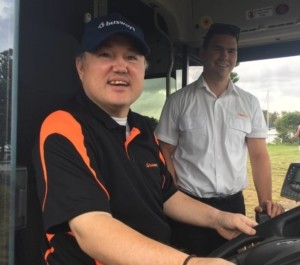