Newman Senior Technical College has continued its long history of success in Worldskills Competitions with an outstanding performance at ‘Skillshow Australia 2018’ which was held in Sydney 4-6 June at the International Convention Centre (ICC) Darling Harbour. This major event included the WorldSkills National Championships which drew competitors from all states of Australia both in the VET in Schools (VETiS) and Open categories and showcased an amazing array of skilled trades and vocations.

This biennial event marked the conclusion of this cycle of competitions which began early in 2017. The hard work shown by teachers, support staff and of course, the talented students, led to the following outstanding results from Newman current and ex-students:

Often referred to the as the “Skill Olympics, the National WorldSkills Championships is Australia’s biggest vocational education and excellence competition run every two years. Held over three days at the recent Skills Show Australia, selected regional competitors brought their best to the national stage and competed against their industry peers from around the country. WorldSkills Australia, is a voice for skills excellence in vocational, technological and service oriented careers in Australia.

“I am extremely proud of our students and staff who attended the WorldSkills competition in Sydney this year. I congratulate, not only, the competitors but also the Newman, St Joseph’s Regional and MacKillop College students who visited the SkillsShow Australia to cheer them on and all of the staff who were involved in making this event the success that it is. In particular, our Leader of VET Curriculum and teacher, Tom Moriarty, who has championed this cause for many years now and has helped this College become one of the most successful VET in Schools competitors at this biannual event”, Mr Pares stated. 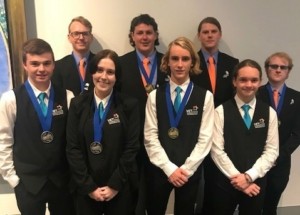