St Mary Magdalene (whose feast is on 22 July and is featured in Fr Paul’s Gospel Reflection), is one of the greatest saints of the Bible and an example of God’s mercy and grace.

The precise dates of her birth and death are unknown, but we do know she was present with Christ during his public ministry, death and resurrection. She was very special in Jesus’ life, very human and able to acknowledge her failings.

There is also debate over if Mary Magdalene is the same unnamed women, a sinner, who weeps and washes Jesus’ feet with her hair in the Gospel of John. Scholars are sceptical this is the same person. However this does not take away her repentant attitude.

The Gospels agree that Mary was originally a great sinner. Jesus cast seven demons out of her when he met her. After this, she told several women she associated with and these women also became followers. She was a great influence in the lives of these women.

She was certainly a sinner whom Jesus saved, giving us an example of how no person is beyond the saving grace of God. Despite the scholarly dispute over her background, what she did in her subsequent life, after meeting Jesus, is much more significant.

Mary likely watched the crucifixion from a distance along with the other women who followed Christ during His ministry. Mary was present when Christ rose from the dead, visiting his tomb to anoint his body only to find the stone rolled away and Christ, very much alive. She was the first witness to His resurrection. 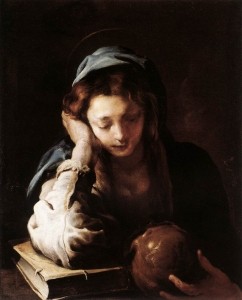