Olivia Pietrantoni was born and baptised 27 March 1864 in Pozzaglia Sabina, about 50kms north-east of Rome.

Olivia, later known as “Livia”, believing she had a vocation to religious life, traveled to Rome with her uncle with the aim of entering a religious order but was turned away initially.

To those who tried to dissuade her by saying she was running away from hard work, she replied: “I wish to choose a congregation in which there is work both day and night”.

A few months later, the Mother General of the Sisters of Charity of Saint Jeanne-Antide Thouret accepted her into their order. She arrived in Rome, aged 22 and received the name “Agostina”.

Sister Agostina was sent to work at the Holy Spirit Hospital, which had served the sick for 700 years. The hospital was not, in fact, hospitable to the religious. Crucifixes and other religious articles were removed and banned, and the sisters were forbidden to speak of God.

While working in the tuberculosis ward, Sister Agostina contracted the disease, but was miraculously healed.

In the course of her work, Sister Agostina found a private corner of the hospital in which to pray for the patients, including Joseph Romanelli, an adult male patient who harrassed her with obscenities and threatening notes. Romanelli was eventually expelled from the hospital, however on 13 November 1894 he attacked Sister Agostina and killed her. As she was dying, she was heard only to utter words of forgiveness and invocations to Mary.

The beatification process for Sister Agostina opened under Pope Pius XII in 1945 where she was titled as a “Servant of God”. The confirmation of her life of heroic virtue on 19 September 1968 allowed for Pope Paul VI to title her as “Venerable”; that same Pope presided over her beatification on 12 November 1972 in Saint Peter’s Square upon the confirmation of two miracles attributed to her intercession.

The final miracle required for sainthood was investigated and validated in 1996. Pope John Paul II approved the miracle in 1998 and later canonised Sister Agostina as a saint of the Catholic Church on 18 April 1999.

Saint Agostina was named as the patron saint for nurses on 20 May 2003.

“I wish to choose a congregation in which there is work both day and night”. Saint Agostina 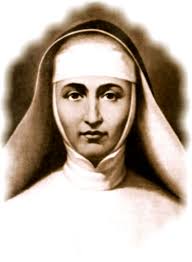