A big thank you to Jim, one of our Pastoral Care Volunteers, for taking the time to write and send in this beautiful true story about how God’s grace worked in the life of one young man – a prodigal son, reunited with his father.

A young man in his early twenties left home in Melbourne, to travel to Hervey Bay to work as a baker. There was a problem at home; he did not know how to deal with.

After two years in Hervey bay, James made up his mind to drive back home. Around Port Macquarie, his car gave up, which left him stranded for the night.

The next day, being Sunday, he found himself at St Agnes Mass. After Mass the Filipino community, cordially invited him to join them for a meal prepared for the community. At this gathering, James met with Fr Caesar. After talking with him for a while, and maybe telling him of his problem, James asked Father Caesar would he would hear his confession. Father, for a penance, asked him to say the rosary.

Kath was due to open the chapel for the morning service; I had dropped her off, then went to park the car. Kath was a bit unsure seeing James sitting there. Then I arrived, and we spoke with him. He told us his story of the lovely food after mass, and his time with Fr. Caesar.

After the service, which started with the rosary, we found James back sitting on the bench outside. I asked him what was happening; he said he was waiting for his dad, who was driving up from Melbourne to pick him up.

James had a phone number for dad but did not have a phone. I got my mobile and James called his dad. I spoke with his dad and told him we would take his son to Maccas at the highway and meet him there. We shared breakfast while waiting.

James’ father arrived with tears in his eyes, held him close, hugged him; tears of joy, as they stood right there hugging each other, tears streaming from his dad’s eyes.

I bought dad a coffee and we left them, to treasure the moment.

On the Wednesday, I met Fr Caesar, and told him of the joyous ending.

James asked Kath and I to pray for him, as he was hoping the Good Lord would call him to the priesthood. If you can find it in your heart, please pray for James’ wish.

We travel together the road to Emmaus with Jesus, our brother, to show us the way. The signs on the roadside our love and compassion, the bread for the journey, is broken each day. 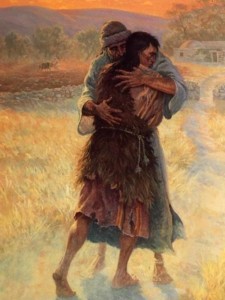