October – Month of the Rosary

October – Month of the Rosary

By tradition, the Catholic Church dedicates each month of the year to certain devotions. The month of October is dedicated to the Holy Rosary, one of the best known of all Catholic devotions. October includes the Feast of Our Lady of the Rosary (October 7).

The Rosary is believed to have been first given to Saint Dominic by the Virgin Mary during an apparition in 1214 in Prouilhe, southern France. She presented it as a source of strength to aid him in the conflicts with Albigensian heretics.

Saint John Paul II expanded on the Rosary’s power in his 2002 apostolic letter Rosarium Virginis Mariae, when he announced the Year of the Rosary and the addition of the Luminous Mysteries:

“With the Rosary, the Christian people sits at the school of Mary and are led to contemplate the beauty on the face of Christ and to experience the depths of his love. Through the Rosary the faithful receive abundant grace, as though from the very hands of the Mother of the Redeemer.” John Paul II called the Rosary his favourite prayer, in which we meditate with Mary upon the mysteries which she as a mother meditated in her heart (Lk. 2:19) (Osservatore Romano, 44; 30 Oct. 1979). If you are not sure how to pray the Rosary here is a quick guide from Ascension Press. 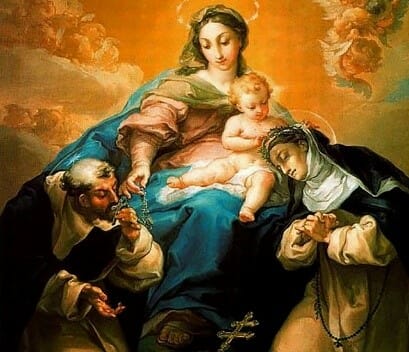